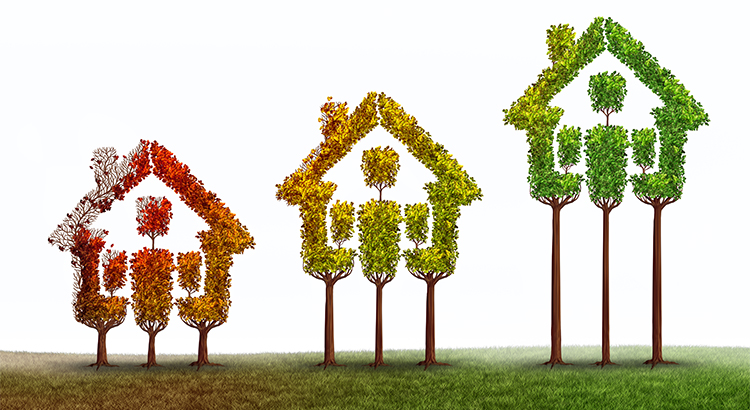 Affluent New Yorkers seeking privacy, space and safety from the coronavirus in the Garden State’s many salubrious suburbs are not only driving New Jersey home prices higher – a trend that will continue for some time – but they are also changing the character of the NJ housing market in unprecedented ways.

That’s according to NJ real estate market analyst Jeffrey Otteau, president of The Otteau Group, whom we heard speak earlier this week.

The surge in NJ home demand from fleeing city dwellers has poured fuel on a hot market already fired up on record low interest rates, rock-bottom housing inventories, and strong demand from millennials.

It’s no surprise, then, that home prices in northern suburban “rail towns” like Maplewood and Montclair are moving higher.

But as more well-heeled New Yorkers than ever before trade their Park Avenue condos for big backyards and socially distant neighbors, even traditionally sluggish NJ market sectors like luxury homes, vacation homes, homes with pools, and homes in counties in the far-flung rural parts of the state, are benefiting as well.

“Backyard and spa-like amenities (like swimming pools) have become critical. If you live in a suburb with a backyard you have a place you can go even if the governor closes down the parks,” Otteau said.

And thanks to telecommuting, home sales in places like rural Sussex County, western Hunterdon County and southern Cape May County were also up, climbing 15 percent, 10 percent and 10 percent respectively.

“That’s people saying I want more space and separation from my neighbors. The further you get from New York City the more affordable that becomes. And vacation homes in beach towns have become the new Zoom towns.”

In fact, migration out of New York into New Jersey has seen the pace of overall home sales in the state spike 2 percent year-on-year in August, far ahead of 2019’s pace for the same period, Otteau said.

“The wild card is migration from New York City,” he said.

As a result of this wild card, Otteau predicts overall home prices in NJ will jump as much as 6.5 percent in 2020, and climb 9 percent between now and 2022, as mortgage rates and housing inventories remain low, and millennials, who account for 72 percent of the market in the state, continue to purchase homes.

“It’s a good time for buyers because interest rates will never be as low as they are now. If you buy now, you can take advantage of the (9 percent) appreciation (in home values) down the road.”

“Consumers are feeling extremely nervous, as they should be. This tells you how irrational the boom in the housing market is. The wild card is escape from New York.”

Given massive job losses, 14 percent unemployment in the state, depressed consumer confidence and the economic contraction the area has suffered due to the pandemic, home prices should be soft or falling, he said.

Instead, low interest rates, tight inventories, and a new-found social mobility for people who can now work remotely is pushing home prices higher, he said.

“Every time (in the past) a weak economy has translated into a weaker housing market. With higher unemployment, people usually cut back on large expenditures and the biggest is buying a house. That’s not the case now,” he said.

Otteau sees a rosy future for the NJ housing market in the next two years, as the country moves beyond a fractious presidential election, the economy continues to mend itself, and a vaccine is developed to contain the pandemic.

While the tsunami of migrants from New York to New Jersey is likely to taper in the next six months, he expects NJ home prices to continue to rise, bolstered by fresh demand from “trade-up” buyers who’ve been sitting on the sidelines and continued strong demand from millennials trading apartments for suburban homes.

“I see all time record home prices for our state as we move to the future,” he said.

On the downside, if job security remains shaky, he said we could see a spike in short sales and foreclosures in 2022, when mortgage forbearance protections for many homeowners are set to end.

“Many households will be beyond the point of recovery because they will still owe (mortgage) payments, interest and penalties,” he said.

And not all boats are rising with the tide.

In another reversal of a long-time trend, home prices in urban Hudson County, once a premier destination coveted for its close proximity to New York, have seen a 14 percent plunge in sales and a 19 percent increase in inventories.

But in the longer run, Otteau believes companies may follow their employees out of the city and into the Jersey suburbs, boosting overall economic growth in the state.

“People can telecommute now, so they can live anywhere.  We don’t know how long (the trend toward working from home) will continue, but if it does, jobs will leave the city and come to the suburbs,” he said.

“For now, the suburbs rule.”

Want to know the price outlook for homes in your town? Thinking of buying or selling a home?  Call me at 201.306.0267 or email me at Tamimafriedman@gmail.com.